Alzheimer’s diagnostic – Diagnostics are as important as finding a therapy 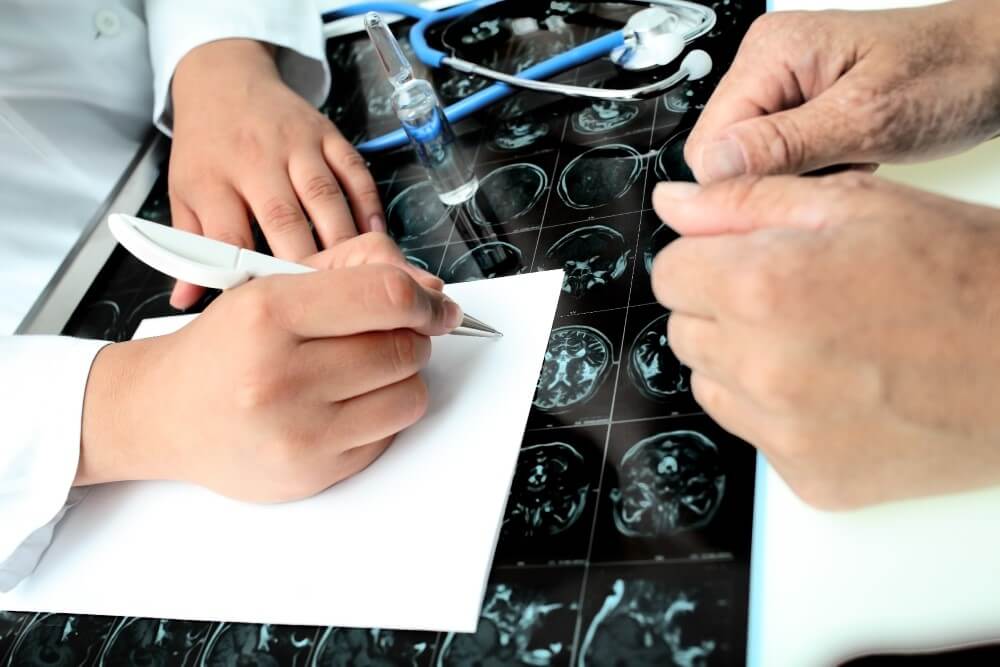 Alzheimer’s is a disease, very much like cancer, that affects so many of us, if not directly then through the experience of a family member or friend. There are currently 5 million people in the US living with Alzheimer’s and given that the western population experiences increasingly longer life, it’s predicted that by 2050 this figure could reach 16 million. It is thought there are 44 million currently with the disease worldwide, yet there is no definitive diagnostic test for Alzheimer’s. In fact, the only way to confirm Alzheimer’s is by a post-mortem examination of the brain.

How can a physician say, then, that someone is suffering from Alzheimer’s disease as opposed to other forms of dementia? It is determined following questions about general health, symptoms and the results of practical tests that assess cognitive function (the mini-mental state exam, or MMSE). Blood tests for APOE-4 can determine a genetic risk for the disease, and over the counter gene testing kits such as the one from 23andme do test for this variant, but users have to ‘opt-in’ to receive the genetic risk factor results for late-onset Alzheimer’s (and Parkinson’s disease), given the implications of having this knowledge. Even then, these tests can only confirm if someone is at a higher risk. Having that specific genetic variant does not mean you will definitely get the disease. It’s also important to note that even if you are at risk, evidence shows that proactive lifestyle choices concerning exercise, diet, social activity and mental stimulation, can delay or reduce the impact of dementia in general.

Have there been any advances in developing a diagnostic test for Alzheimer’s?

The FDA has approved some computerized cognitive tests but these mainly act in conjunction with the regular MMSE run by the physician and they ensure the test is run in the same way each time. Since 2012, the FDA has also approved three agents used when a patient undergoes a PET (Positron Emission Tomography) brain scan (Amyvid, Vizamyl and Neuraceq). This procedure reveals the amyloid plaque build-up in the brain, which is an indication that the symptoms a patient is experiencing are likely to be caused by Alzheimer’s.

For a PET scan, patients are injected with a tracer agent, such as Amyvid, that attaches to amyloid plaque in the brain. The radiation released enables the PET imaging tool to reveal the areas of amyloid plaque build-up. A PET scan can be carried out to confirm or double-check the diagnosis made by a physician, but is likely to be used to eliminate conditions with similar symptoms, rather than being a standalone test for the disease. They tend not to be used for patients whose age and symptoms make Alzheimer’s a confident diagnosis. For those experiencing cognitive issues at an early age or for unexplained reasons, a PET scan can be a valuable diagnostic tool. Imaging tests are, however, expensive and invasive, requiring an injection, maybe a lumbar puncture and then a brain scan.

A recent study by the University of Cambridge is using PET imaging to look at different ways plaque build-up, or the growth of tau filaments, spread and damage neural networks in different types of Alzheimer’s. It shows “for the first time that a key protein which causes nerve cell death spreads throughout the brain in Alzheimer’s disease – and hence that blocking its spread may prevent the disease from taking hold”.

Hopes for a simple diagnostic

Promising as this is, it is a long way from a universal diagnostic test for a disease that could affect so many. A recent breakthrough, however, offers a possible step towards this goal. “Chemistry students at Hong Kong Baptist University have developed a new method to detect Alzheimer’s disease simply by testing a patient’s saliva or urine in just half an hour.” Their hope is that at only HK$10 per test, this simple, non-invasive procedure to diagnose the presence of beta amyloid peptide, a protein strongly linked with Alzheimer’s, could pave the way for a population screening test.

Frustratingly, the lack of simple diagnostic tools to detect Alzheimer’s disease mirrors the lack of therapies. There is no cure for the disease and, although the FDA has approved five drugs that can either slow the destruction of synapses and neurons, or regulate the glutamate levels that can speed cell destruction, development of new therapies is proving very difficult. Pfizer has just recently announced it is pulling out of its drug development for Alzheimer’s and a number of other large pharmaceutical companies have seen Alzheimer’s drugs fail in late stages of development. Merck ended a trial of verubecestat in February 2017 after it was established there was “virtually no chance of finding a positive clinical effect.” Esai and Biogen announced in December 2017 that its 12-month readout in the trial of anti-amyloid beta drug BAN2401 was disappointing, and there have also been recent unsuccessful trials for Alzheimer’s therapies from Lilly/AstraZeneca with solanezumab and Axovant Sciences with intepirdine.

Precision or personalized medicine has been steadily increasing its move into general medicine. If one day a precision therapy is found to successfully treat or prevent the onset of Alzheimer’s, it will be even more important to develop a companion diagnostic that detects the presence of the disease, so that as many patients as possible are treated at the earliest opportunity to ward off the devastating effects of this condition.

Please contact us to explore ways we can assist with the commercialization of your Alzheimer’s diagnostic test.

The CMS National Coverage Decision on NGS
I. Introduction On March 16, 2018, the Centers for Medicare and Medicaid Services (CMS) finalized a National Coverage Determination (NCD) that...
Read more
EU IVD Regulation – What does it mean for companion diagnostics and LDTs?
Dave Smart, PhD, Director at Diaceutics, discusses the introduction of the EU IVD Regulation. While it is considered a necessary step, the...
Read more
View all expert insights

TRK fusion positive cancers: From first clinical data of a TRK inhibitor to future directions
Genetic alterations of neurotrophic tropomyosin or tyrosine receptor kinase (NTRK) 1/2/3 genes generate TRK fusion proteins have been reported in a variety of adult and child cancers from diverse cell/tissue lineages. Larotrectinib, a...
Download
Challenges in the clinical implementation of precision medicine companion diagnostics
The pace of biomarker discovery has increased exponentially over the last few years,ushering in an era of precision medicine (PM) with a growing arsenal of treatments tailored to specific patient populations....
Download
View all publications